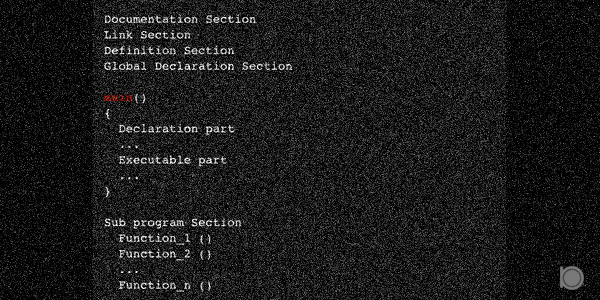 Every C program has a definite structure that is based on the basic structure of the C language. A typical C program mainly consist of 6 main sections as follows:

Without the above components the C program may not execute or compile properly.

All the symbolic constants are defined in the Definition Section. A symbolic constant is a constant value that remains unchanged throughout the program execution. A definition section also consist of the preprocesser directive command.

In global declaration section, global variables and user defined functions are declared. The variable declared in this section can be accessed and used anywhere in the program.

The declaration part consists of all the variables and functions declaration that will be used in the executable part.

This part contains the statements that are to be executed by the compiler. There should be atleast one executable statement in this part.

The main() Function section must have opening and closing braces { }. Every statements inside main() function must be terminated with semicolon ; except for some exceptions.

A typical example of C program having all the sections